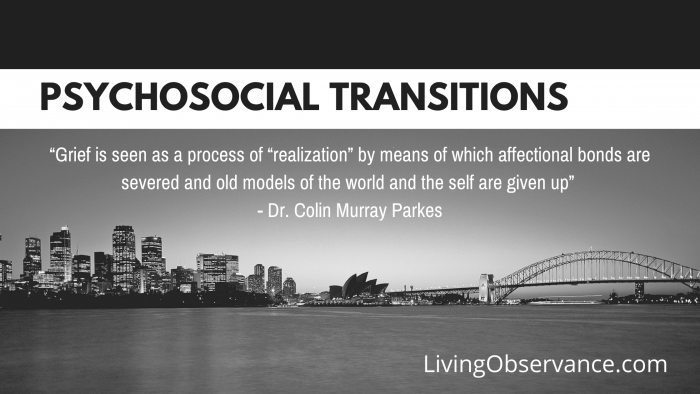 There are small routines that we develop over time that become part of our world. You could almost say that these routines become part of our identity. They could be with a substance like cigarettes and alcohol or to an activity like exercising. We may start and stop some habits because of stress, but what about when the habit involves another person, and that person passes away? When you can no longer return to that habit, you are forced to change or remove part of your identity and the death of part of yourself compounds the pain of losing a loved one.

A Story From My Grief Journey

I frequently travel for my work. I would pass through the Seattle Tacoma Airport at least seven times a week for connections. The connections were usually between 1.5-3 hours. Without fail, for five years, I would call my mom every time I was waiting for my flight.

It's a strange phenomenon, but people can open up more on the phone than in person. I would talk to my mom about her day, health, work, family history, personal history, the lessons she learned throughout her life, and the prism through which she viewed the world. I treasured those phone calls and looked forward to them every time I traveled. They were my relief valve for a challenging and fast paced career.

These phone calls rejuvenated me and motivated me to continue grinding away at some of the more monotonous parts of life. These phone calls with my mom were part of the bedrock of who I am. Then my mom passed away. After my mom died, I still had to go to work, I still had to travel, and I still had to go through the Seattle airport at least seven times a week. Now every time I traveled, I was confronted with my loss. Every time I was in the Seattle airport, I felt as lost as a broken-down boat floating in the middle of the ocean.

Like some of the other grief theories, the Psychosocial Transition theory is not only designed to understand grief. The theory is born from a combination of stress research, crisis studies, and loss research. The original paper is an excellent read and touches on many areas, including divorce, a new way to think about crime and punishment, and even homelessness. In the abstract of the article Psychosocial Transitions: A Field For Study, where Dr. Parkes introduced the theory, he concisely says, “Grief is seen as a process of ‘realization’ by means of which affectional bonds are severed and old models of the world, and the self are given up.” While simple on the surface, there is actually a fair amount to unpack.

One of the most well-adapted parts of Dr. Parke’s theory is the idea of an assumptive world. “The assumptive world is the only world we know, and it includes everything we know or think we know. It includes our interpretation of the past and our expectations of the future, our plans, and our prejudices.” That definition is a lot to chew on, but after grasping this as our starting block, the rest of the theory ‘just makes sense.’ 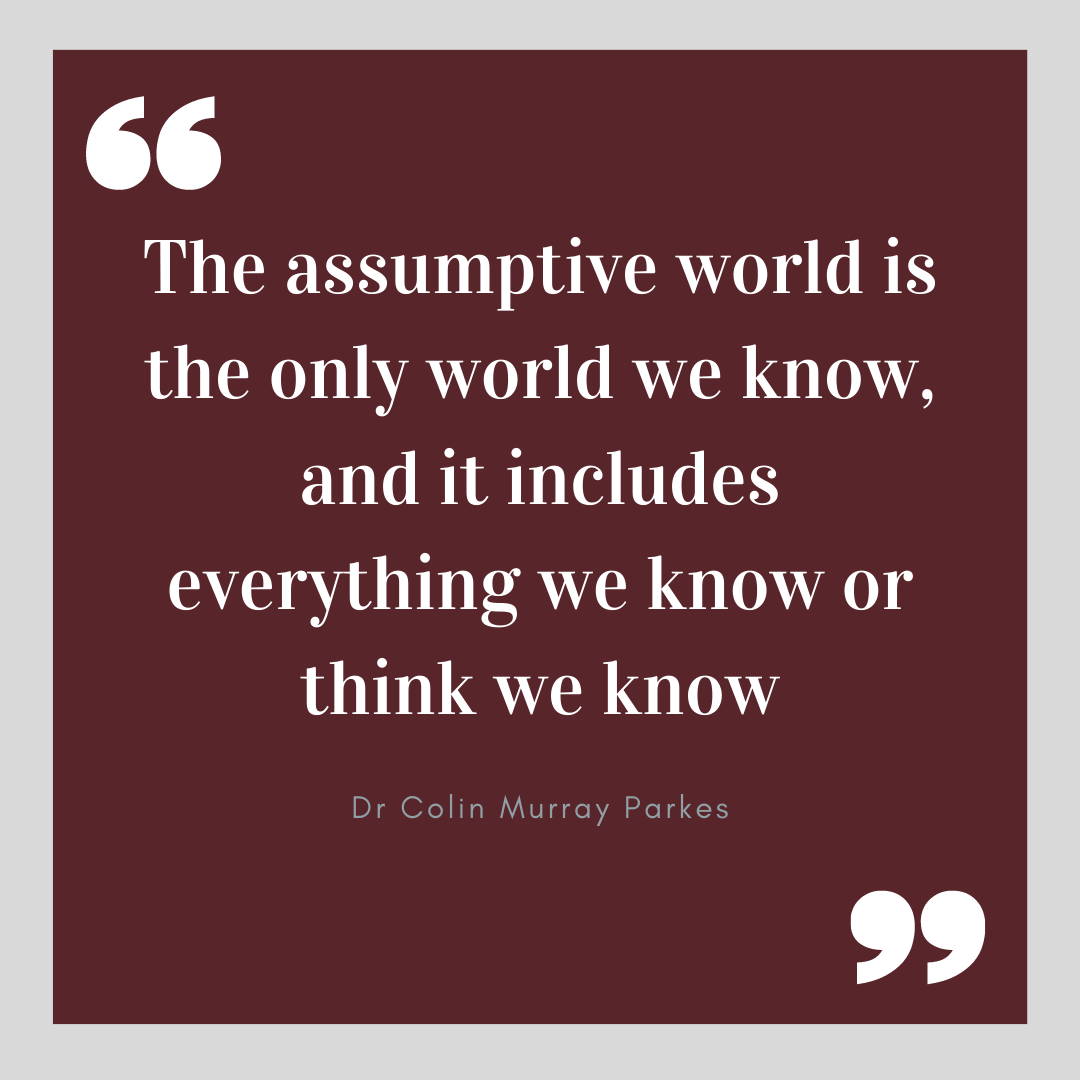 Inside of our assumptive world, we have built a metaphorical sense of ownership around pieces of our identity that are more significant to us. The things that we usually describe as “mine” are the things that we have affectional bonds with. (‘My job’ is in ‘my home city’ where ‘my school’ and ‘my favorite sports team’ are. More importantly, ‘my city’ is where ‘my mom’ was.) The term psycho-social transitions is defined as “major changes which are lasting in their effects, which take place over a relatively short period of time and which affect large areas of the assumptive world.”

Dr. Parkes further expands on the process of changes by saying, “Some of these changes fulfill expectations and require little or no changes in the assumptive world, others necessitate a major restructuring of that world, the abandonment of one set of assumptions and the development of a fresh set to enable the individual to cope with the new, altered life. If the changes take place gradually and the individual has time to prepare, little by little, for the restructuring, the chances that this will follow a satisfactory course are greater than they would be if the change was sudden and unexpected.”

The last piece of the theory that I want to share with you describes the pain associated with psychosocial transitions. “... some changes in life may cause me to ‘question an assumption’; to objectify an assumption and examine it much as one might question a witness in a court of law. Such examinations are painful because of the threat which they represent to the established assumptive world. Moreover, there are many assumptions which are not ‘open to question.’”

The Application of Psychosocial Transitions in My Life

When my mom passed away from a stroke, there was no time to prepare. My assumptive world was thrown into an abyss of chaos. Most of my expectations for the future evaporated without any regard for my opinion. My mom was going to meet my firstborn child in 5 months. We were going to spend our holidays at her house. My mom was going to spoil my daughter despite what my wife and I said. Now that my career was finally starting to take off, I was going to be able to start repaying her for all of the sacrifices she made and the support she gave me. I would buy her the small luxuries that she always wanted (a brand new refrigerator, one of those nice looking fake fireplaces from Costco, mirrored sliding doors for her closet). I could finally afford to take her on our first real family vacation.

My non-negotiable assumption was that my mom’s life and my family’s life were finally getting better. In a moment, half of that assumption was made impossible. I notice that almost four years later, I still try to avoid abandoning this assumption. Every time I pass through the Seattle-Tacoma airport, I am forced to confront it again. As time passes, I can slowly rebuild that assumption in a new form. In order to reshape it, I have to examine it like Dr. Parkes described, as a witness in a courtroom.

Part of the reason I created Living Observance is to help me maintain my non-negotiable assumption in a healthier way. While my mom is no longer here with us, my memories of her, and all of her friends and family’s memories, still are. By compiling all of those memories in one spot, my assumption can still be realized because her memory will constantly be getting better. My children will also, in a way, still be able to meet her. Her humor, her wisdom, and her gentleness will still be shared with my children, and because of that, she will continue to be a part of their lives. Because my mom will continue to be a part of my children’s lives, the second part of my assumption can be realized. My family’s lives will continue to get better.

Grief theories are constantly developing and adapting to the new information that we learn. There most likely isn’t going to be a single theory that matches all of your experiences, but there will be several that touch some aspect of your journey. The more touchpoints you encounter, the more you will understand yourself and, more importantly, what your needs are to heal.

What do you think of Dr. Parkes Psychosocial Transitions theory? Is there another theory that better aligns with your experiences? If you enjoy these articles about understanding grief, join our mailing list to ensure you are notified when the next theory comes out.