Top 4 Criticisms Of The Stages Of Grief 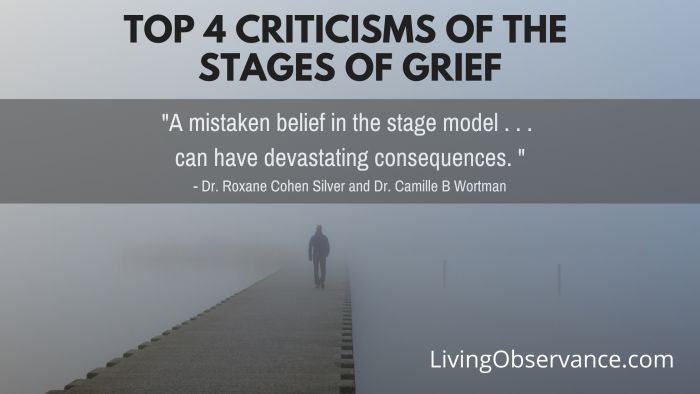 I started learning about the grief I was enduring after I lost my Mom in 2017. The first thing that I remembered about grief was that we are supposed to go through stages. That gave me hope because I believed that I could try to move through these stages and the hurting would finally stop.

I turned on my computer and searched for “the stages of grief”. From there I began a long journey of learning about how to heal from a major loss. While grieving I became worried that I wasn’t grieving properly. I felt like I was in the Anger phase longer than I was supposed to be. I couldn’t figure out how to move on to Bargaining which made me feel even more angry. Before I knew it I was in the Acceptance stage without ever passing through the other stages.

I thought I wouldn’t find closure unless I found a way to go through all of the stages. As I searched for other people’s experiences with the grieving process, I found that there are several prominent psychologists that are quite critical about the stages of grief theory.

We recently covered the many variations of Stage Theory and how they apply to bereaved people. If you didn’t get a chance to see that in-depth article, or if you want to review some of the concepts of the stages of grief, you can see it here.

A quick search of “arguments against the stages of grief” will reveal a number of long form articles by highly credentialed people debating the merit of stage theory. You should read as many of those articles as you can, but if you only have time to read one then this is the one you should read.

Many of the criticisms can be boiled down into 4 major categories: Misrepresenting the grieving process, negative consequences to bereaved people, lack of depth, and lack of evidence. I’ll summarize each criticism below.

The idea that the grieving process can be distilled into a salient 5 bullet process that smoothly progresses from one stage to the next is an oversimplification of the real experience a bereaved person may go through. The grief that someone experiences is usually neither linear nor completely captured by the stages of grief. Instead, just like me, people may not experience all of the stages. Grieving people may not experience the stages in the order described in the models. Some people will actually experience more than one stage simultaneously.

The five stages of grief by Dr. Kubler-Ross were initially meant to describe the grief that someone confronting the end of their own life will face. Too often the stages are used to forecast the course of grief that a bereaved person will experience. The two major errors here are applying the 5 stages of grief to a bereaved person and trying to predict the future using this model.

The model also mixes emotions with processes which muddles the entire theory. Denial is a defense mechanism. Anger is an emotion. Bargaining is an action. Depression is an emotion. Acceptance is a cognitive process. The lack of consistency makes it difficult to put the stages in any order that is sequential.

By having a series of stages, people often infer that there is an amount of time that one will remain in each stage before progressing to the next. Because every bereaved individual has a unique experience, there is no set time frame to remain in any individual stage or experience the stages in a particular order.

One of the unintended consequences of adhering to the stages of grief models is that bereaved people may have unrealistic expectations about what their grieving experience will be like. Some people will feel better in being able to self-identify with the stages. Those that don’t may feel that there is something wrong with them (like I did).

Even worse than a bereaved person setting unrealistic standards for themselves is when the people that are supposed to support them do it. Imagine someone is sobbing quietly to themselves. Externally it looks as though the person may be depressed. Staying in the framework of stage theory, the person may actually be angry. They express their anger internally rather than externally. The last thing this person wants to hear from another person is that they are depressed. That is only likely to hurt them more and delay their journey to recovery.

Lack Of Depth in Explanation

Because the Kübler-Ross model was created after having over 200 conversations with the terminally and dying, it was a reflection on broad themes present in the conversations. The 5 stages didn’t originate from a scientific hypothesis which was then validated with data. The 5 stage model doesn’t explain why the stages are ordered in a specific sequence. There is also no explanation about the underlying mechanisms that are responsible for people feeling varying degrees of intensity in each stage.

Yale conducted a study on bereavement that followed 233 people that survived their spouses for a period of 24 months. The study found some evidence that people will experience some of the stages some of the time. However, the study did not support the sequence of stages nor did it account for a strong yearning that the bereaved experience.

Now that you know the major criticisms of the stages of grief, I hope you can find some comfort if your own grieving isn’t following this model. As we grieve we are already subjected to enough emotional strain. The last thing that we need is to feel additional stress that we “aren’t processing our loss correctly”. Don’t compare your grieving to anyone else’s. Your journey is unique and is exactly what you need to heal. The two most important actions you can take are to focus on your own healing and recognize when you may need the guidance of a professional.

If you are interested in other grief theories you should look at our articles covering The New Model of Grief by Dr. Tony Walter, and Psycho-Social Transition Theory by Dr. Colin Murray Parkes. Check back soon because I will publish a new article that goes over some of the alternative theories about how we grieve. Join our mailing list to be notified about that post and to receive a sneak peek at next week’s content.

More in this category: « An Overview of Popular Grief Theories

Make sure you enter all the required information, indicated by an asterisk (*). HTML code is not allowed.