An Overview of Popular Grief Theories 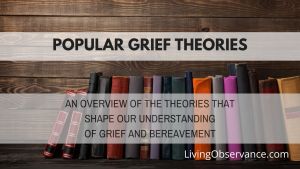 There are a number of different grief theories that contain excellent advice about healing that you may have never heard of. Every time I read an article, blog post, research paper, or book about grief I learn something that helps with my personal experience with bereavement. The more that I learn, the more comfortable I am with grief and the easier it is to process my ongoing grief. This article is designed to give you an overview of some of these theories. This post will be updated as I encounter more grief theories. Check back for updates soon! 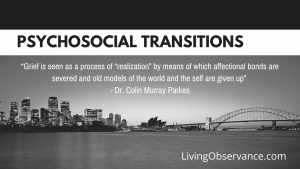 There are small routines that we develop over time that become part of our world. You could almost say that these routines become part of our identity. They could be with a substance like cigarettes and alcohol or to an activity like exercising. We may start and stop some habits because of stress, but what about when the habit involves another person, and that person passes away? When you can no longer return to that habit, you are forced to change or remove part of your identity and the death of part of yourself compounds the pain of losing a loved one.

The New Model of Grief

Many of the classic approaches to grief seem to prescribe certain gateway emotions or actions to progress through grief. Those gateways are broad observations from looking at large sample sizes. These observations are helpful (and powerful) in the same way that statistics can identify general trends. Similarly, the most significant weakness is that these observations can not be applied to an individual, just like statistics. As a result, parts of some of the theories will feel like they are spot on in your individual experience. In contrast, the same theory feels like it misses the mark with several other ideas it puts forward. Sometimes, it is better to evaluate a few case studies in-depth rather than a large data set.

Top 4 Criticisms Of The Stages Of Grief 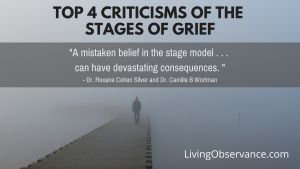 I started learning about the grief I was enduring after I lost my Mom in 2017. The first thing that I remembered about grief was that we are supposed to go through stages. That gave me hope because I believed that I could try to move through these stages and the hurting would finally stop.

I turned on my computer and searched for “the stages of grief”. From there I began a long journey of learning about how to heal from a major loss. While grieving I became worried that I wasn’t grieving properly. I felt like I was in the Anger phase longer than I was supposed to be. I couldn’t figure out how to move on to Bargaining which made me feel even more angry. Before I knew it I was in the Acceptance stage without ever passing through the other stages.

I thought I wouldn’t find closure unless I found a way to go through all of the stages. As I searched for other people’s experiences with the grieving process, I found that there are several prominent psychologists that are quite critical about the stages of grief theory.

The Stages of Grief 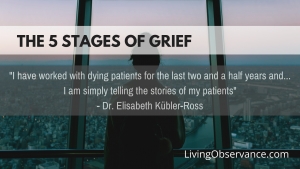 I was out of town when I received a phone call that my mom was hospitalized from a bilateral ischemic stroke. The floor felt like it had melted beneath my feet and I was starting to freefall into a foreign environment where there was no order to reality. During the time my Mom was in the ICU and later after she passed away I was completely overwhelmed by the sudden prospect of losing my mom, the legal issues surrounding her health and estate (no will was in place), informing friends and family of what happened, fielding questions about my mom, having conversations with the health care team, researching about her condition and possible treatments, and trying to find time for self care. I was grasping for any semblance of an order to everything that was swirling around me. I wanted to stop falling. In one of my lowest moments I asked myself, “Isn’t there some kind of thing about stages of grief?” I thought that what I would later discover is called Stage Theory would save me from the stresses I was drowning in.